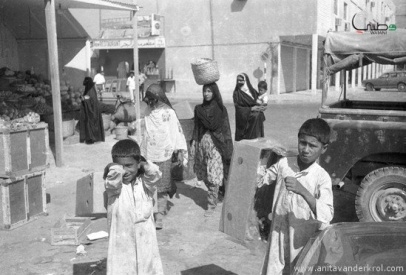 In 1976 Concorde commenced supersonic commercial passenger services to the US and Bahrain from Europe, the 21st Olympic Games were held in Montreal (Canada), Jimmy Carter was elected the 39th US President, the CN Tower in Canada was completed as the tallest building in the world (555m) and China’s revolutionary leader Moa Tse-tung died in Beijing. Closer to home the United Arab Emirates celebrated its fifth birthday on 2nd December and in Dubai.

In Dubai an energetic group of lady expatriates from many nationalities with the assistance of influential UAE Nationals started the Art Society of Dubai (later ‘DIAC’). A first exhibition of works by ten artists was held at the Intercontinental Hotel in Deira between the 30th May and the 2nd June 1976. The then Chairperson Mary Jose told the ‘Gulf Mirror,’ “We knew there was considerable artistic talent in Dubai. So we decided to find it!” Presciently Mary added that the Society was open to all irrespective of their level of accomplishment. If people had an interest art the Society had people willing to teach them.

The first three years were spent organising activities and classes in founding member's garages until with generous help from people such as Businessman Khalaf Al Habtour and Oscar Mandody a Director at the Dewan the Society moved into a Villa on the Beach Road in Jumeirah 1 in 1979. It's next milestone was to become self supporting by 1982 as the Villa rents had been underwritten by Mr Mandody for the first three years. During this period 20 local companies contributed to maintenance and improvements in cash or kind. Registration for art courses in 1981 (c) The Gulf Mirror In a permanent home the Society became the focal point of art in Dubai. During this period Dubai's expatriate population grew steadily with investments in oil and other infrastructure projects and so did membership of the Society. A Gulf News archive photo taken in 1981 shows a very busy open day and a bookings desk working hard to keep up. Against the backdrop of the turbulent but eventful 80's and 90's in the Arabian Gulf region the Society, like Dubai itself, grew and flourished. So too did the range and quality of courses and artistic output. The Society's regular Exhibitions of local and international art became major events in Dubai's growing cultural calendar.

What’s in a name?

Since inception DIAC has operated under four names; ‘The Art Society of Dubai’ (1976-1985), ‘Folk Art Charity Association for Teaching and Showing’ (1986-1989), ‘The Dubai Arts Centre’, and finally, since 1995, the ‘Dubai International Art Centre’ or better known by its acronym ‘DIAC’.

The last change in name was suggested by the changing character of Dubai itself. No longer a mysterious Sheikhdom settled on the shores of the Arabian Gulf Dubai was fast becoming an international business center with diversity and growth at its core. With this came more students, teachers and friends from diverse backgrounds and cultures. The new Dubai also demanded more and better art and art facilities.

Ever-present change in a fast-moving City of the 21st century required DIAC to leave the original Jumeirah Beach Road home in 2004 and set up in its new location near Mercato Mall.

By now the pressure of funding fast-rising rents and increased operating costs represented the greatest challenge in DIAC’s history. Fortunately, this was offset by the boom in both the creative art scene and business done by art galleries in Dubai and the massive growth in Dubai’s population.

From 2005 through careful stewardship by DIAC’s Board and good day-to-day management DIAC weathered these challenges and has emerged strong and focused and ready for the next stage in its development. Art for All.